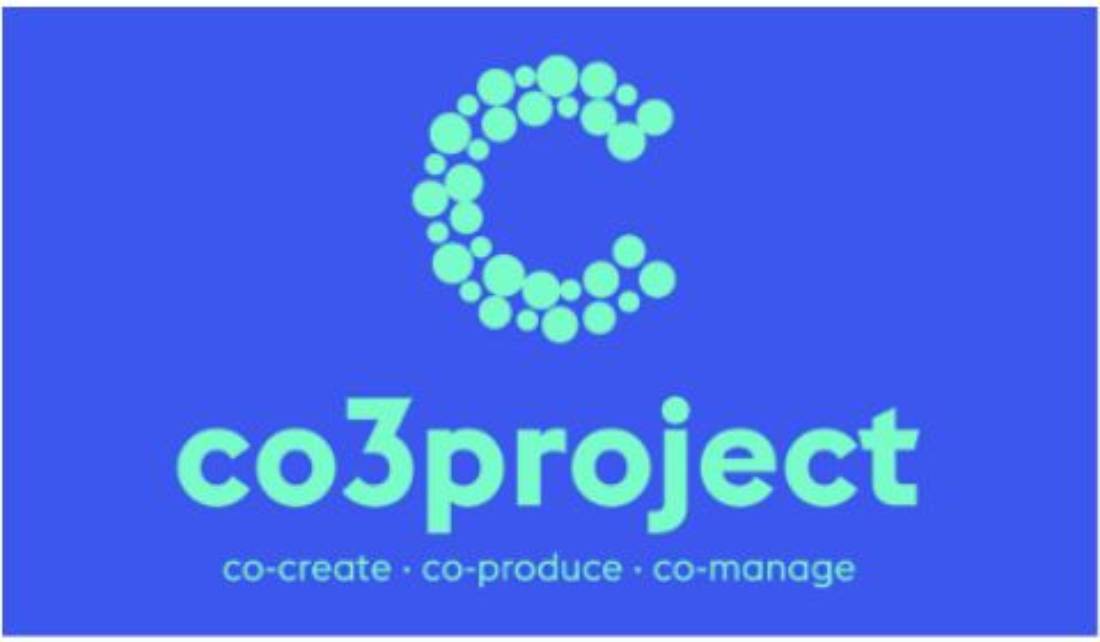 The project evaluated the benefits and risks of disruptive technologies, namely blockchain, augmented reality, geolocated social network, liquid democracy tools and gamification, in the co-creation, co-production and co-management of public services with citizens as PAs partners. Augmented Reality has become a single shared layer on the urban landscape and part of citizen’s public life, AR has enabled manipulation of financial objects built on blockchains, information sharing on a map, online deliberations and constitutes an infrastructure for service co-production by citizens. CO3 piloted the technologies’ ecosystem in three sites. It evaluated the outcomes of the new interaction model between PA and citizens under a set of metrics in three dimensions: 1) social and cultural: citizen engagement, change in relationship with public servants; 2) economic: value of services produced, effects on workplaces, consumptions and economic sustainability; 3) legal: legal implications for PA including privacy and data protection. CO3 has developed a business plan ensuring long term sustainability for the PAs on the basis of the metrics applied on the pilots’ data.

The City of Torino was mainly involved in the CO3 pilot actions together with the co-partner Rete Case del Quartiere (https://www.retecasedelquartiere.org), a multifunctional community hub located in different areas of Torino. Torino focused on three different houses: Cecchi Point – Piùspazioquattro – Cdq San Salvario.
CO3 technologies were applied to four case studies, all part of a scenario called “Augmented Commoning” aimed at facilitating the participation and involvement of citizens and at strengthening economic interactions: users were able to access augmented reality and create, display, interact with increased content of different types: informative and cultural content in the form of images and videos; 3d objects representing blockchain entities such as coins or vouchers; 3d objects representing voluntary activities requested by Cdq managers or by associations based in the Cdq; 3d objects representing courses, events or other activities for which users can register.
The first case study in the Torino pilot was the issue of a prepaid card: each of the 3 Cdq, thanks to Blockchain technologies, issued their own currency in the form of prepaid card. Citizens and organizations were able to buy the Cdq currency and manage their prepaid cards through the Blockchain wallet.
The second Torino case study was the management of voluntary activities. The CO3 app allowed to create and advertise volunteer activities, which were displayed as 3D objects in the Augmented Reality layer. Users were able to register by interacting with the 3D object.
The last case study included the use of coins and tokens in the annual activity planning of the Cdq. In different phases of the activity planning, the managing bodies have collected inputs from the community. CO3 technologies have supported this process in several ways: for example, when deciding which courses to host, the CO3 app users were able to pre-register using the House coins.
We expect that the CO3 disruptive technologies will contribute to make citizens more involved in the co-creation, co-production and co-management of services within the Case del Quartiere and will strengthen the Cdq sustainability and governance model, making active citizenship easier.

The CO3 project has built an analytical framework to study the potential benefits and risks of new disruptive technologies such as Blockchain, Augmented Reality, Geolocation in Social Networking, Opinion Formation and Gamification and their potential to promote co-creation, co-production and co-management of public services.

The project aimed to:

Last updates about the Project

Watch on the app video tutorial